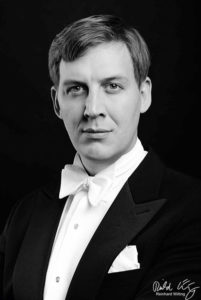 It is kind of Swedish, but I always sang in a choir. Seven years as a boy soprano in Visby’s Cathedral until I at last became a base fourteen years old (and the mocking of the over sized soprano ended). One year later my parents thought that I should start in their choir (lack of bases; the story of my life). During my high school years there was a lot of choirs. At the most six and among them the male chorus Nio Sångare. I just loved the way of socializing and singing that the Swedish male chorus tradition offers, so after my military service (it was compulsory until 2010 in Sweden) I went to study chemistry at the Uppsala University and sang in the world renowned male chorus Orphei Drängar. Here the story could have ended: “happy choralist and professor retires from University 2054”. But I soon realized that I did not want to become a chemist, so OD’s singing teacher suggested I should try singing for a year.

“Why not?” I thought and got in at Vadstena Peoples High school 2006. Here my singing teacher Monica Thomasson slowly but firmly started to push me away from being a choir singer. She did it so well that I 2008 entered The Malmö Academy Of Music where I sang for Britta Johansson. The following year I tried out for the Opera Academy in Copenhagen and failed. But I had my mind set: I would become an opera singer and OA would be my master education. So I took drastic action and threw out my computer and did not buy a new one until I got in, luckily only one year later.

OA is a collaboration between DKDM and The Royal Danish Theater and the education is mostly at the Copenhagen opera. The students also often get opportunity so sing small roles at the main stage. My voice kept developing and this was my first scenic education. It went over expectation considering the prizes I won and that I at the end of my second year got an offer to enter the soloist ensemble after my graduation, one year later!

I have been lucky to have a voice that is rare (that opens doors) but more so by meeting the right teachers and having so good classmates all through my seven years of education, that have inspired me and pushed me further. School is not over, the voice keeps developing and new roles must be mastered, so the most luck I have had is meeting the classmate that is still with me as critique, cheerleader and colleague as well as wife and mother of my children.

I hope I get to do this for a long time and that You, my audience, want to listen, see and feel the classical music with me. Thank You for getting me this far!