“Stephen Tharp had the riskiest billing, closing out the (2014 Boston AGO National) Convention in the only recital before the entire gathering. Tharp responded with the performance of a lifetime … the whole thing so dazzlingly executed as to emboss itself upon the memory.” 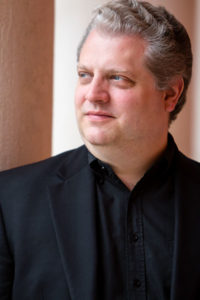 Stephen Tharp, described as having “performed colorfully, rousing and splendid” by The New York Times, and hailed as “the organist for the connoisseur” (Organ magazine, Germany), “the thinking person’s performer” (Het Orgel), “every bit the equal of any organist” (The American Organist magazine) and “the consummate creative artist” (Michael Barone, Pipedreams), is recognized as one of the great concert organists of our age. Having played more than 1500 concerts across over 50 tours worldwide, Stephen Tharp has built one of the most well-respected international careers in the world. He is listed in Who’s Who in America and Who’s Who in the World, and is the recipient of the 2011 International Performer of the Year Award by the New York City chapter of the American Guild of Organists, considered by many to be the highest honor given to organists by a professional musicians‘ guild in the United States. In 2015 he was given the Paul Creston Award which recognizes artistic excellence in church music and the performing arts.

He has given master classes at Yale University; the Eastman School of Music; Rice University, Houston; Westminster Choir College; the Cleveland Institute of Music, Bethel University (St. Paul, MN); the Hochschulen für Musik in Stuttgart, Trossingen and Bochum (Germany); and for chapters of the American Guild of Organists. He has also adjudicated for competitions at the Juilliard School and Northwestern University, and will serve as a member of the jury for the 2018 Chartres International Organ Competition.

Stephen Tharp remains an important champion of new organ music, and continues to commission and premiere numerous compositions for the instrument. The first such piece was Jean Guillou’s symphonic poem Instants, Op. 57, which Tharp premiered at King’s College, Cambridge, England in February 1998. Works dedicated to him include George Baker’s Danse Diabolique (2016) and Variations on “Rouen” (2010); Henry Martin’s Prelude and Fugue in c-# minor (2011); David Briggs’ Toccata Labyrinth (2006); Samuel Adler’s Sonata (2005); Eugenio Fagiani’s Psalm 100 (2009) and Stèle (2003); Thierry Escaich’s Trois Poèmes (2002); Philip Moore’s Sinfonietta (2001); Anthony Newman’s Tombeau d’Igor Stravinsky (2000), Toccata and Fuga Sinfonica on BACH (1999) and the Second Symphony (1992); Martha Sullivan’s Slingshot Shivaree for Organ and Percussion (1999); and Morgan Simmons Exercitatio Fantastica (1997). Himself a composer, Tharp was commissioned by Cologne Cathedral, Germany to compose for Easter Sunday, 2006 his Easter Fanfares for the inauguration of the organ’s new en chamade Tuba stops, as well Disney’s Trumpets, composed in February 2011 for the organ at the Walt Disney Concert Hall, Los Angeles, where it was premiered by the composer the following month.

In April 2008, Stephen Tharp was named the Official Organist for the NY visit of Pope Benedict XVI, playing for three major events attended by more than 60,000 people that were broadcast live worldwide. Mr. Tharp’s playing has also been heard on both English and Irish national television, on Radio Prague, orgelnieuws.nl in the Netherlands, and in the U.S. on American Public Media’s Pipedreams. In 2005, 2011 and 2015, Pipedreams broadcast entire programs dedicated exclusively to his career, making him one of the few organists in the world so honored.

He is also an active chamber musician nationwide, having performed on organ, piano and harpsichord with artists such as Thomas Hampson, Itzhak Perlman, Jennifer Larmore, Rachel Barton Pine, the American Boychoir (James Litton, conductor), the St. Thomas Choir (John Scott, conductor), and at Carnegie Hall, the Metropolitan Museum of Art, Alice Tully Hall and Avery Fisher Hall at Lincoln Center. His 15 solo organ recordings can be found on the labels Acis Productions, JAV Recordings, Aeolus, Naxos, Organum and Ethereal, and are available from the Organ Historical Society (organhistoricalsociety.org), JAV Recordings (www.pipeorgancds.com) and Amazon.

His commercial release The Complete Organ Works of Jeanne Demessieux on Aeolus Recordings, received the 2009 Preis der Deutschen Schallplattenkritik, Germany’s premier critic’s prize for recordings, as well as the French 5 Diapason award. The release was celebrated in October 2010 with Mr. Tharp’s performance of the complete Demessieux works live over three concerts at New York’s Cathedral of St. John the Divine. Stephen Tharp plays St. Bavo, Haarlem, The Netherlands on the JAV label was called “the most beautiful CD of 2009” by Resmusica in France.