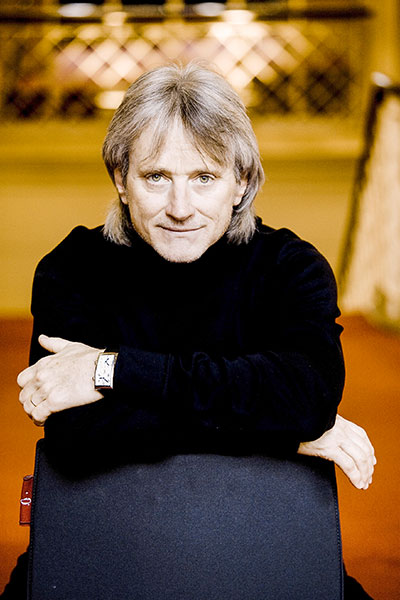 Music Director of the Pacific Symphony for more than two decades, Carl St. Clair has become widely recognized for his musically distinguished performances, innovative approaches to programming, and commitment to outstanding educational programs. The largest ensemble formed in the United States during the last fifty years, the Pacific Symphony’s rapid artistic development is due largely to Mr. St. Clair’s leadership. During the orchestra’s first European tour several years ago, they consistently played to packed houses and received rave reviews.

Most recently, Mr. St. Clair has been named Music Director of the Orquesta Sinfónica Nacional de Costa Rica. Now in its 75th season, the orchestra is a well-established regional and national orchestra serving the entire country.

Largely influenced by his close association with Leonard Bernstein, Mr. St. Clair’s commitment to the development and performance of new works by American composers is evident in the wealth of commissions and recordings by the Pacific Symphony. Under his guidance, the orchestra has commissioned works such as Philip Glass’s The Passion of Ramakrishna; William Bolcom’s song cycle, Canciones de Lorca (premiered by Placido Domingo); and Chen Yi’s cello concerto Ballad, Dance and Fantasy composed for cellist Yo-Yo Ma. Many have been subsequently recorded, including Richard Danielpour’s An American Requiem on Reference Recordings and Elliot Goldenthal’s Fire Water Paper: A Vietnam Oratorio on Sony Classical with cellist Yo-Yo Ma. Other recordings include the highly acclaimed CD of later works by Toru Takemitsu for Sony Classical, and works by John Corigliano and Frank Ticheli for Koch Classics. Additional commissioned composers include James Newton Howard, Zhou Long, Tobias Picker, and Christopher Theofanidis.

Carl St. Clair has also been general music director and chief conductor of the German national Theater and Staatskapelle (GNTA) in Weimar, Germany (the first non-European to hold this position). This role gave him the distinction of simultaneously leading one of the newet orchestras in America and one of the oldest in Europe. He has also served as general music director of the Komische Oper in Berlin, and principal guest conductor of the SDR/Stuttgart, where he successfully completed a three-year recording project of the entire Villa-Lobos symphonies. In higher education, he has had a continuing relationship with the USC Thornton School of Music for over 20 years. Since the 2005/2006 season, he has been principal conductor of the USC Thornton orchestras and a faculty lecturer in conducting. In 2012, he took on the expanded role as artistic leader and principal conductor of the USC Thornton orchestras.