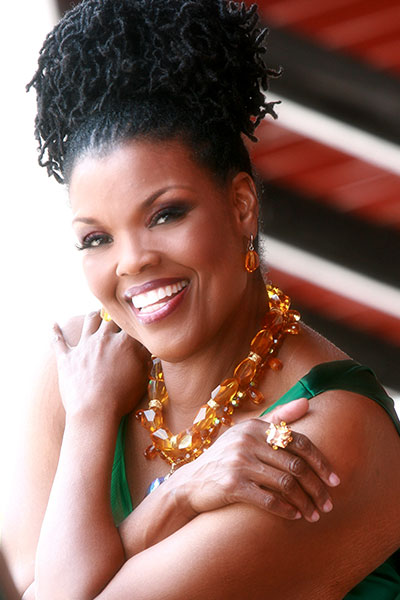 Her highly successful Metropolitan Opera debut in the title role of Aida captured instant attention from international print and broadcast media and catapulted Angela onto the world’s prestigious opera and symphonic stages. Headlines from The New York Times read: “At last an Aida,” and CBS Weekend News proclaimed: “the future of opera has arrived!” followed by features on the front page of The New York Times, on CNN, in Oprah Magazine, Essence Magazine, Ebony Magazine, Classical Singer, Reader’s Digest, and Psychology Today.

While opera is the main catalyst for her career, Angela’s performance experience includes everything from star hostess on stage to producer and creator of Opera…from a Sistah’s Point of View, an inspired show that has gained international notoriety for bringing opera to the masses in the form of an edgy, yet educational, concert presentation.

Last season held new milestones for Angela when she co-starred in the new American opera, Charlie Parker’s Yardbird in the world-premiere performance with Opera Philadelphia, returned to her hometown of Indianapolis for the 2014 Yuletide Celebration series with the Indianapolis Symphony Orchestra, and sang on the newly-released and Grammy-winning recording of “Ask Your Mama,” composer Laura Karpman’s setting of the poem by Langston Hughes of the same title. The 2015-16 season includes performances with Asheville Symphony Orchestra, a collaboration with Tuskegee University Choir in a Christmas extravaganza, recitals for Riverside Symphonia and St. Philip’s Concert Series, solos with Carmel Symphony, and a concert version of Porgy and Bess with Buffalo Philharmonic. Angela will reprise the role of Addie Parker in Yardbird at The Apollo in New York City this April and again for Lyric Opera of Chicago and Madison Opera in 2017.

Earlier career highpoints include her collaboration with American composer Richard Danielpour. Her early success as Aida was immediately followed by world premier performances of Danielpour’s opera Margaret Garner in the role of Cilla with Opera Philadelphia, Cincinnati Opera and Michigan Opera Theater. The result was a triumph that led Mr. Danielpour to set the poetry of visionary Maya Angelou for Angela’s voice in an orchestral song cycle, A Woman’s Life, co-commissioned by Pittsburgh Symphony and Philadelphia Orchestra, recorded in 2012 with the Nashville Symphony and released on the Naxos label in 2013.

A noted interpreter of African-American spirituals, Angela released Mosaic, a collaborative recording featuring spirituals with guitar and piano, in October 2004 from Albany Records. In 2005, a live Christmas concert with the Indianapolis Chamber Orchestra and Indianapolis Opera Chorus was recorded by WFYI-PBS and broadcast throughout the United States. She guest starred on A Prairie Home Companion with Garrison Keillor radio show in 2009. In July 2010, Angela was presented in Shanghai at the World Expo 2010 as a guest of USA Pavilion and the United States Consulate. Angela was the only opera singer invited to perform for the USA Pavilion. She also opened the One Nation Working Together Rally in Washington, DC, by singing the National Anthem on the steps of the Lincoln Memorial, and was selected by Marvin Hamlisch to premier his song composed for her and the Indianapolis Children’s Choir in honor of The Indianapolis Prize.

A 1997 National Metropolitan Opera Council Auditions Winner, Ms. Brown received her Bachelor of Music degree in voice from Oakwood University in Huntsville, Alabama, where she studied with Ginger Beazley. She attended the Indiana University School of Music as a student in the studio of Virginia Zeani. Ms. Brown received the Indiana University African American Arts Institute’s inaugural Herman C. Hudson Alumni Award in 2006, given annually to recognize outstanding contributions made in the arts by former members of the Institute. Ms. Brown is featured in “Nineteen Stars of Indiana,” a book by Michael S. Maurer about nineteen, living Hoosier women with successful and inspirational life stories, released by Indiana University Press in December 2008. In fall 2009, Angela received the Governor’s Arts Award from the Governor of Indiana, a Spirit of the Prairie Award from Conner Prairie in Indiana, and was inducted into the Indianapolis Public Schools Hall of Fame.